Once you go Barack.. A rude awakenening for Rudy

After realizing that the future is up to a few good leaders…it seems Rudy’s daughter might not go back to backing her dad’s bullshit political stance.

Guiliani’s 17 year old daughter…Caroline was caught on Facebook describing herself as liberal and a member of Barack Obama’s campaign support group. 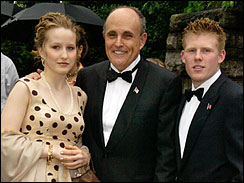 (CBS/AP) Rudy Giuliani loves her. Barack Obama can’t wait to meet her. Caroline Giuliani created political waves with a Facebook entry — later removed — that showed her to be a political liberal and an Obama backer.

On her Facebook profile, the 17-year-old daughter of the Republican presidential hopeful listed herself as a member of Obama’s Facebook group, “Barack Obama (One Million Strong for Barack).”

She left the group Monday morning after the online magazine Slate sent an inquiry and later in the day, a spokeswoman said she did not intend to comment on the 2008 race.