Its a pretty well embedded urban..herbin’..myth that drug cops steal the drugs off their investigative targets and resell them for profit.

Years ago…just mentioning or questioning this phonemenon would get you a quick delivery of “good ole boys” at your door with a bogus warrant and a blank slate to retaliate.(Florida is really the capital of corruption…but for arguments sake.)

Seems the tables have been turned in VA….. 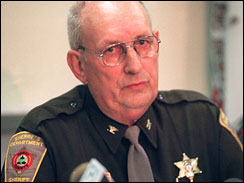 The longtime sheriff of Henry County, Va., and 12 former and current deputies have been charged with participating in a drug-trafficking ring in the rural county on the North Carolina border, Drug Enforcement Agency officials said yesterday.

Twenty people, including sworn officers, employees and associates of officers, dealt in illegal drugs, including cocaine, crack, steroids, ketamine and hundreds of pounds of marijuana, over a five-year period beginning in 1998, federal officials said. Participants in the conspiracy also trafficked in seized weapons, including a machine gun, according to a 48-count indictment returned Wednesday in Abingdon and unsealed yesterday.

Harold F. Cassell, 68, who has been sheriff since 1992, was alerted to the illegal activity but did nothing to stop it, instead making false statements and aiding in money laundering to cover it up, federal officials said.

While investigating more than 200 Web sites that illegally sold drugs around the world, DEA agents intercepted an express mail package containing 2 kilograms of ketamine, an animal tranquilizer known as Special K, that was shipped to a Henry residence, the indictment says.

The investigation found that since 1998, “sworn officers, employees, and associates of the Henry County Sheriff’s Office engaged in a continuous scheme to steal narcotics, firearms and other contraband from the seized evidence property room,” a statement by Mr. Brownlee’s office said. “The defendants took cocaine, crack cocaine, marijuana, and firearms, and then sold the stolen drugs and guns back into the community.”