Medical Marijuana dispensaries and patient collectives were raided thru out this past summer.

There are currently an estimated 30 to 40 clubs in San Francisco, according to city officials. Last year, facing a growing number of unregulated clubs, the San Francisco Board of Supervisors passed an ordinance that established rules for where the cannabis clubs can be located and how they are run.

“Obviously, the DEA is on a little bit of a rampage this week,” said Dolphin, citing other pot club crackdowns in Granada Hills, San Fernando Valley and Modesto. 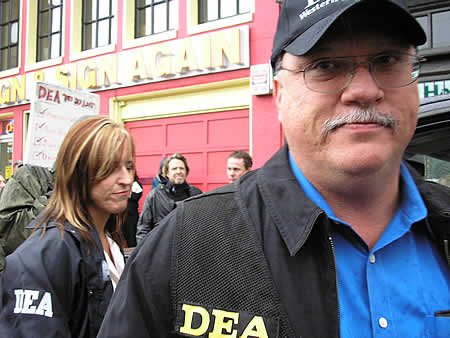 On Tuesday, the DEA raided at least eight locations in the San Francisco Bay area, seizing more than 12,000 plants, $125,000 cash, and a fancy sports car. Despite somewhat hysterical initial reports in the local media, all the raids were connected with the New Remedies dispensary in San Francisco, which involved the same people involved in Compassionate Caregivers, which was raided by the DEA in Los Angeles in May 2005, when the feds found more than $300,000 in cash, sparking the investigation that culminated in the Monday raids.