JAKARTA, Indonesia, May 27 – A drug smuggling case that has captivated and outraged Australia came to a climax on Friday when a 27-year-old Australian woman was given a 20-year prison term for trying to bring nine pounds of marijuana into Bali hidden in her bodyboard bag. 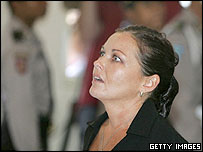 The three judges who heard the case could have sentenced the defendant, Schapelle Corby, to death, a fate met by many foreigners convicted of drug offenses in Indonesia and other Southeast Asian countries.

The actor Russell Crowe, an Australian, also weighed in for Ms. Corby. “How can we, as a country, stand by and let a young lady, as an Australian, rot away in a foreign prison?” he said on a radio talk show.

“We gave Indonesia how many hundreds of millions of dollars in tsunami relief?” Mr. Crowe asked.

Aussies vow to boycott Bali and other Indonesian travel destinations in retaliation.

Lets do the same…fuck those INDO clowns for thinking MJ is harmful.